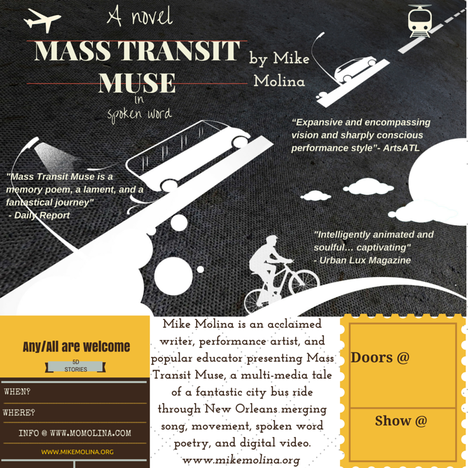 Mass Transit Muse is a multi-media, genre-blending performance told in rhymed and metered prose with hip hop and vocal songs, movement, and digital images. The story follows an attorney and professional storyteller who returns to post-Katrina New Orleans to oversee the demolition of his childhood home. Shaken by the loss of the last vestige of his childhood, he ventures on a bus ride through the city to reconnect to his roots. A series of humorous, heart-rending, and impactful interactions with bus riders set the stage for his healing through connection with others.

​Mass Transit Muse creator and performance lead Michael Molina is an accomplished actor, author, and multi-media performance artist who seasons the earthy experiences he brings from his native New Orleans with the worldly perspective he gained as a graduate of Yale Law School and as a national and international spoken-word performance artist.